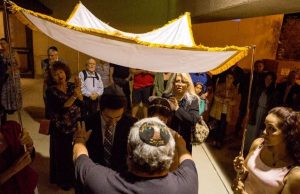 The topic is Crypto Jews, people coming to Mexico from Spain who converted to Catholicism.  Hour One we hear from El Paso Rabbi Stephen Leon, who has helped about 70 families return to their Jewish heritage over the years.  He has written a book on the subject.

In Hour Two, we will talk with Honorary Spanish Consul Martha Vera, who will explain how many people of Hispanic heritage who came to El Paso or Juárez centuries ago and settled in this part of North America are descendants of the hundreds of thousands of Sephardic Jews who were tortured, forcibly converted, burned alive at the stake and ultimately expelled from Spain and later Portugal.