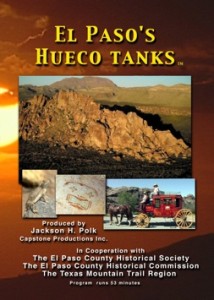 Filmmaker Jackson Polk describes Hueco Tanks as a world-class jewel in the desert.

“Whether you come to climb the boulders, study the plants and animals or honor the spirits that blow with the wind, Hueco Tanks is alive with experiences that can’t be found anywhere else on earth,” Polk said at the end of his latest documentary film, “El Paso’s Hueco Tanks.”

The site is best known for its vast collection of spectacular and rare pictographs, or rock art. The video depicts Hueco Tanks as El Paso’s oldest and largest art gallery.

“What we’re trying to do is create a television program that can be exported from El Paso to explain Hueco Tanks to anybody who doesn’t know it,” Polk said in a recent interview.

Jackson is optimistic that the video, one of several he has produced on the region’s history, will help educate city and county officials about the potential in heritage tourism. The $28,000 budget for this project included a $12,000 grant from the El Paso County Commissioners Court.

“You have all kinds of factions out there – rock climbers, Native Americans, the state of Texas and recreational people that think they own the place,” Polk said.

Hueco Tanks is known for its hollow areas that catch and hold the desert’s rare rainfall. Water attracted animals, plants and humans for centuries.

Texas Parks and Wildlife Department manages the site, which the state acquired from the county in 1969. The Tigua Tribe of the Ysleta del Sur Pueblo, the Mescalero Apaches and Kiowas in Oklahoma all claim that Hueco Tanks is part of their culture and history.

Over the years, archaeologists have found an ancient village there and confirmed Hueco Tanks served as a burial ground for various people who once inhabited what has been described as a a desert oasis.

Sammy Gutierrez of the Ysleta del Sur Pueblo suggests in the video that rock climbers, hikers and others leave their tracks on land that many Native Americans consider sacred.

“It would be the same as me going into a church and try to do all kinds of stuff on their altars, which is not right,” he said. “We go out there for a purpose, a purpose to pray, a purpose to respect, a purpose to take care of the place. It is very sacred because of the water that’s there.”

Hikers and rock climbers come from all over the world to test their skills at Hueco Tanks. The site also has 20 campsites for recreational users.

Scientists have identified four species of shrimp, various other animals and microscopic life.

“We’ve also discovered at least three new species out there that hadn’t previously been known to science,” UTEP biologist Liz Walsh tells Jackson in the video.

Polk is convinced that Hueco Tanks is one of the most fascinating and unusual geological features in the region.

“If we show off our history, maybe people will come see it,” he said.

Watch this TV documentary for free at https://youtu.be/frmivLnje0A

Listen to the El Paso History Radio Show on KTSM AM 690, Saturdays from 10am to Noon. Also live online at www.KTSMRadio.com. Call the show live on Saturdays and join the discussion… 915-544-5876. Hear Podcasts of past shows on this website. Link is found on the menu section.

The Asarco smelter had thousands of workers over the century it was open, and we talk with some people who worked there, and some who lived there amongst the piles of ore and railroad tracks.

Special Forces Vietnam Vets are having a convention here, and we plan to talk with some of the El Paso men about their history.

We focus on the New Mexico Space History Museum in Alamogordo, NM with the director, Chris Orwoll, who has many programs going on these days. He will explain the space exhibits at the Museum and some space history.