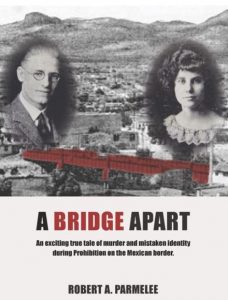 Bob Parmelee’s new book is called “A Bridge Apart”, about a Mexican Revolution era robbery in El Paso and life on the border at the end of Prohibition.  A Bridge Apart reveals a true story, made possible by the revelation of a fifty year old secret concerning the love story of two high school sweethearts, a love story turned upside down by border violence during Prohibition and the Depression, and which ultimately involved the highest levels in the American and Mexican governments.  The vivid descriptions of the fighting in Juarez put you there almost in person.