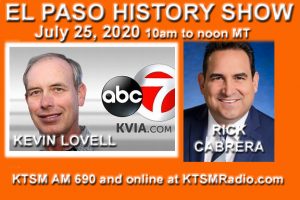 Between the two of them, they have more than five decades in broadcasting and journalism in El Paso. Along the way, they reported on many of the most memorable events and crises that continue to shape our region, even today.

They are Kevin Lovell, the longtime general manager of Channel 7 KVIA, who was a reporter before he went into management, and Rick Cabrera, who was a news and sports anchor at the station for almost 20 years.

On the July 25 broadcast of “The El Paso History Radio Show” hosted by Jackson Polk and Melissa Sargent, we’ll talk with Lovell and Cabrera about the TV history they’ve been a part of, plus history-making events in El Paso.

Your cart is empty
Visit The Shop
© 2019 Capstone Productions Inc. All Rights Reserved.